The gaps are filled and a new generator rises.

Later on, Michael Steiner, found a trick to get rid of the white gaps between the pieces.

Steiner figured out that if you pressed “[alt]” and then “08204” in Notepad, you would get an invisible character that could be used between the codes, instead for spaces.

A new generator was made by Gheorghe A. Iordachi with some help from Lars Arne Svanes:

Unlike the one made by Lars Arne Svanes, this generator only needed the link to the album, and not each individual picture to make the code.

This was achieved with some regexp magic explained here by Lars: http://expdvl.com/files/web/fbrep.php 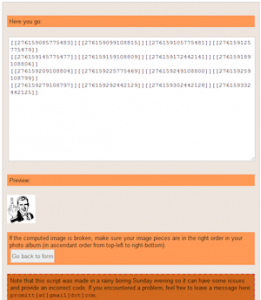 A video guide where this generator was used can be seen here:

This entry was posted in Chat Codes. Bookmark the permalink.